I'm making a multiplayer game in Unity using the Mirror networking api which built upon the now deprecated Unity one. I got a local host system working fairly quickly but I wanted to get a version up on the web I could play with others to validate my ideas. I looked for tutorials and it was a bit of a mess, so I'm going to try to document all the successful steps I took to get the bare minimalist thing working:

Step 1: Build the server in Unity 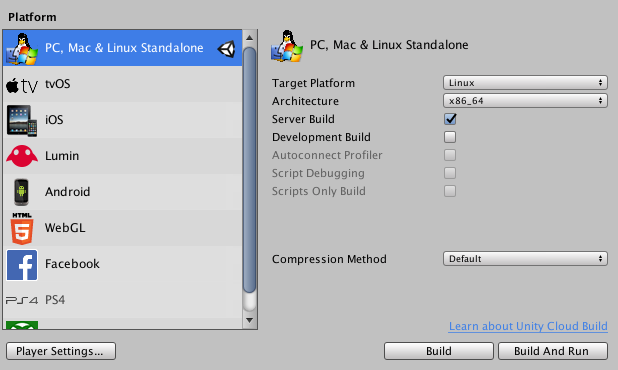 Click Build and choose a reasonable directory and filename, for me I used

Make a directory called server/ which will contain all your configuration files for running the server. Now zip your server into a file in that directory:

Note: You should test the server works on your local host. If you are on Mac like me, just recompile a mac version of your server, run and connect a client to it. You want to make sure it works before you do anything else below.

Docker is a way to put your server in a container that has exactly what it needs to run and no more. These instructions are for Mac OS but you can find similar instructions for your OS. Basically download this file: https://download.docker.com/mac/stable/Docker.dmg and install it. For more details I followed https://www.thegeekdiary.com/how-to-install-docker-on-mac/.

Once I had that installed, I needed to make a container for my server. You create a Dockerfile that basically explains how to build your setup. Mine looks like this:

Some quick notes. Basically this downloads the latest version of ubuntu, installs zip, copies your serverfile, and unzips it. After that we create a user called "unity" so things don't run as root. We give permissions to the server and change users.

One you have that file, you can build it as follows (change [USERNAME] to your name):

Lets test it. In a new terminal use

And your server should be running on your localhost. Connect a client to it to confirm it works. Now you'll try to kill it with Ctrl-C and it hasn't actually killed the process:


A note. This is all happening in your localhost, but you actually want to put this out into the world. So you need a place to push your container on the web. The default is to use Docker Hub which lets you have one private repository for free (or you can make it public but I doubt you want to for your game). So I signed up for that, then had to point my local docker instance to it:

Kubernetes is a way to describe how to deploy and connect those docker containers you are making. This tutorial will be specifically for how to get that server working on Google Cloud using kubernetes. First, we have to set things up. I already had gcloud installed and a Google Cloud account for this website. Go through those steps:

Now that we are somewhat setup. We can now make a deployment that will create our server and if it dies, recreate it. Create a file deployment.yaml:

We can deploy it:


To test and see the pods it created run the following commands:


I'm assuming things are working for you (there aren't errors in any of those screens). But note we still can't connect to our server, we have to expose its port:

Try it! Now you should be able to access your game through port 80 on the EXTERNAL-IP listed above. Run a client of your game using that IP and port. If you are using Mirror change the TelepathyTranport port and change localhost in your NetworkManager to the ip address

You should have a single game server running that your clients can reach. Obviously you're not ready for production but at least you have a hello world server that is running your game code. Longer term you'll need to architect something probably involving matchmakers, etc.